On this day twenty years ago, one of the most beloved games of all time got a sequel that wasn’t technically a sequel at all. After the huge success of GoldenEye 007, developer Rare knew it wanted to make a sequel to top its system-defining movie tie-in but also was unsure if it wanted to work within the confines of James Bond again. When a rights bidding war emerged for the ability to make a Tomorrow Never Dies game, the decision was cemented, and Perfect Dark was born.

Despite the property switch, Perfect Dark is very much a sequel to GoldenEye. In many ways it is GoldenEye turned up to eleven; detail is now dense enough that the RAM-boosting N64 Expansion Pak accessory was required to even start the campaign missions. Small details in GoldenEye like enemy reactions to being shot in specific places are now writ large. Levels are larger and more dynamic with lighting effects that at the time boggled the mind. The story is delivered not just via pre-mission briefing notes and subtitles, but through full voice acting.

It isn’t all just an incremental sequel to the 007 adventure, however. Gone are the admittedly thrilling rearrangements of the familiar Bond theme, replaced instead by a score thick with atmosphere and indicative of the game’s tone. That element of the game is a triumph, too – a story that is tonally a dystopic, Blade Runner-like science fiction thriller laced with spy story tropes – but only for a while, before it takes a turn into campy alien intrigue.

At first it’s corporate espionage, sneaking into rival corporate offices to steal back technology. This is the bit of Perfect Dark people remember, and that’s fine. But then it gets progressively campier – a visit to Area 51 to rescue an alien called Elvis, saving the President aboard Air Force One, underwater bases, and ultimately a trip to an alien world to save the day. It’s mad, brilliant, and completely different to Bond.

Protagonist Jo Dark, inspired at least in part by La Femme Nikita, The X-Files’ Scully and even Joan of Arc (Joanna Dark, get it?) is no mere Lara Croft clone – she was envisioned as something more, as professional and impressive as Bond. She, too, is great. Five years later we’d see her again with little of this charm, however – as an impetuous teenager in Perfect Dark Zero. That game captures some of the magic of the original, especially in its DarkOps multiplayer, but in many other ways it fumbles, in part presumably because the shadow of Halo loomed large over the sequel, diluting elements that made its predecessor great.

Anyway, Happy Twentieth Birthday to Perfect Dark, a charming shooter that proved just how well it’d aged with a snappy, high frame rate Xbox Live Arcade port. Twenty years is a long time, and a great time for reflection. So let’s reflect and say this: it’s time to bring Perfect Dark back.

I covered this in our list of top games Xbox should bring back on the Xbox Series X, but Perfect Dark is a perfect chance for Xbox Game Studios to recreate a prestige property – and it has the pieces in place to define itself as a very different property to what Microsoft already has available.

Xbox has shooters – but the original Perfect Dark is more than that. As a descendant of GoldenEye, it benefits from open-ended level and objective design that in the present day is only really represented in IO Interactive’s Hitman titles. Perfect Dark also had difficulty that scales in more than just enemy strength and intelligence – the harder the difficulty, the more you actually have to accomplish in any given mission.

Basically, any future Perfect Dark should be a spy game, not just a shooter. An espionage game featuring tight, exciting shooting with cool weapons that have outlandish alternate fire modes. The word espionage is key – because this isn’t just another stealth game. Stealth in video games conjures up images of visibility meters and enemies slipping from patrol to alert to combat states and back again. Perfect Dark isn’t quite like that – but it’s all about feeling like a secret agent, even if you do a lot more blasting than even the trigger-happy Bond does in the movies. 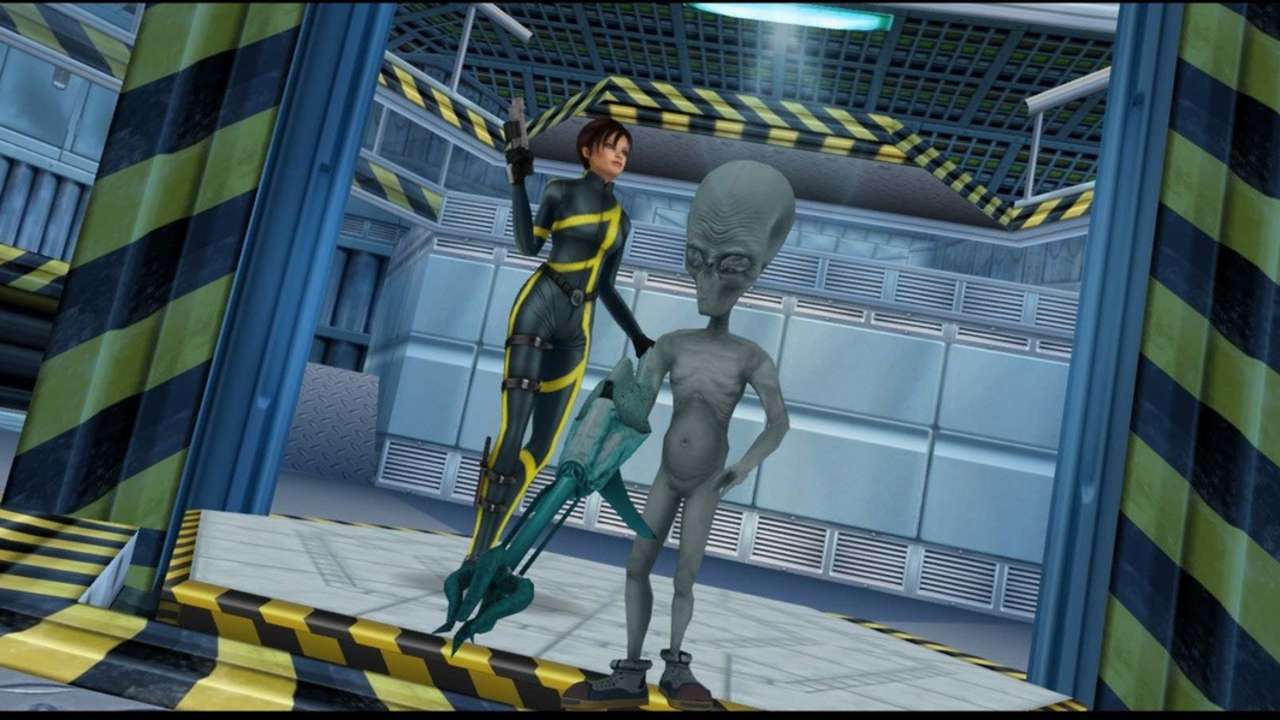 Through this specific tone and feel, Perfect Dark has the potential to be something more – part shooter, part immersive sim, part something else unique entirely. As Joanna’s forebear said on the big screen in Casino Royale, it’s an opportunity to be “half monk, half hit-man”.

The time is right; Perfect Dark Zero is set in dystopian future of 2020. It’s a year of cyberpunk with a return to Midgar and CD Projekt’s massive RPG looming. And later this year, the MI6 operating number 007 is to be handed to a woman in the upcoming No Time to Die. Just remember: as far as taking over from Bond goes, Jo was there first.

Basically, all of this is a very long way of saying that Perfect Dark is bloody great. So let this be the year, be it a sequel or a reboot. Are you listening, Phil Spencer? Bring it back.

We might yet get our wish, too. Online gaming conspiracy theorists have noticed the logo of new Xbox studio The Initiative shares its shape and style with Perfect Dark villains DataDyne – and that studio is working on something as-yet unannounced. Fingers crossed.

Arkane Studios at 20: searching for the balance between accessibility and complexity

The Orange Box – Valve Behind the Scenes

An Update From Me…

The Orange Box – Valve Behind the Scenes

An Update From Me…